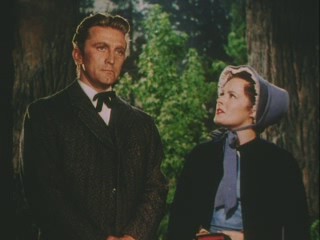 In 1900, lumberman Jim Fallon (Kirk Douglas) greedily eyes the big sequoia redwood trees in the virgin region of northern California. The land is already settled by, among others, a religious group led by Elder Bixby (Charles Meredith) who have a religious relationship with the redwoods and refuse to log them, using other smaller trees for lumber. Jim becomes infatuated with Bixby's daughter, Alicia (Eve Miller), though that does not change his plan to cheat the homesteaders. When Jim's right-hand man, Yukon Burns (Edgar Buchanan) finds out, he changes sides and leads the locals in resisting Jim. The locals combat Jim's loggers with a sympathetic judge with Jim fighting back by using Federal laws.

Elder Bixby is killed when a big sequoia tree is chopped down by Jim's men and falls on his cabin. Jim's desperate attempt to rescue Alicia's father saves him from being convicted of murder. Meanwhile, timber rival Cleve Gregg (Harry Cording) appears on the scene, making it a three-way fight. Gregg and his partner Frenchy LeCroix (John Archer) try to assassinate Jim, but end up killing Yukon instead. Jim has a dramatic change of heart and leads the settlers in defeating Gregg and Frenchy. Afterwards, Jim marries Alicia and settles down.

Zontar, the Thing from Venus